Check out this vid!

I think sometimes these types of images and videos get swept under the rug with all the things that are said and posted on social media.  Often people rant about their hardships, politics, religion and so on and something like this doesnt always get the recognition that it should.  I feel as though we often get caught up in the hamster wheel of life and we forget about all the simple things that really matter. Both this picture and youtube clip speak volume to the idea that we now a days tend to take so much stuff for granted because we are so accustomed to always wanting more. If we took a second each day, sat down, looked around us and appreciated everything that came with it rather than complaining about things that happened or things that we didn't get I believe people would be much happier.  I feel as though people's capabilities are limitless but in today's society people are constantly told that they can't do something or that isn't possible...in this day in age I feel that many people have forgotten how to not only dream but how to dream big.  A great quote from the video clip is when, Conner is asked, "Where is the perfect place for you and Cayden to be at in 10 years?" His response is, "You know how people have the American flag on the moon, we'll have the team Long Brothers flag on the moon." If that isn't dreaming big I don't know what is.  Lastly, at the end of the video when he is giving his speech it is funny how they pan to the crowd and people like Lebron James, Beyonce, Jay-Z and Coach K are all present and people that we generally look up to are all captivated by this young kid who has done nothing but continue to dream and push forward..he is someone we should be looking up to daily.

Make the best of each day that you are given! Time is not refundable once it is gone, it is gone forever..don't waste it!

In January I wrote a guest post for Renee on this topic for her blog.  If you are interested in learning more about this issue, check out my article and her awesome blog at: http://healthylifeharbinger.wordpress.com/ and also here is the direct link to my article:

As Renee states on her blog, "Be Strong. Be Informed. Be Healthy."

Our life is our own and we have the power to live it the way we would like to..why not live a healthy life then!

I hope everyone is having a great day, get out and enjoy this spring weather.

Posted by Unknown at 7:20 AM No comments:

Why wait until tomorrow when you can make a change today?

Treat your body and mind great and you will feel and think great.  Many of us wait too long or decide to put things off by saying "I can do it tomorrow," there is no reason to push something off until the next day or week when you can take action today and make it happen.  This idea applies to all areas of life: work , family, fitness, by taking action you can make a change in not only your life but inspire many others to do the same.

Here is a quick article on the importance of magnesium and how a deficiency of it may be the reason why you feel tired or sluggish throughout the day, check it out!

Posted by Unknown at 1:50 PM No comments:

Interesting article on Aspartame...an artificial sweetener that is used as a replacement to high fructose corn syrup, cane sugar and other high calorie, high fat sugars, in an effort to reduce the amount of calories that are in certain sweet foods and drinks that we consume.  Aspartame can be found in diet soft drinks, candy, breath mints, some low cal yogurts and some condiments such as ketchup and sugar free chocolate syrup. Its crazy to think sometimes how a lot of the foods and drinks that people choose to consume are doing nothing more than destroying our bodies.  Treat you're body right and feed it with the proper nutrients that it needs and deserves. Eat great..feel great..eat clean!

Check out this article,

Make the most of today!

Living so close to the city of Boston, and having family and friends that live, work and go to school in the city, the bombings that occurred Monday during the Boston Marathon hit close to my families hearts and had us very worried for most of the day trying to get in touch with people we knew running in the race and nieces, nephews and cousins who attend a few of the colleges in the city.  Luckily after many phone calls and text attempts we were able to get in touch with everyone, and they were all safe.  There is not much to say about these bombings other than how tragic this event really is.  An event like the Boston Marathon which is one of the world's oldest annually held marathon's and with all of its prestige and popularity ranks as one of the world's best known road running events, is now tarnished due to the heartless acts of others.  In a day and age after 9/11 and events such as the Colorado movie theater shooting and the Newtown shootings, Americans are already on edge and nervous as to what could be next.  No one should have to live this way, wondering what may happen next if all of these kinds of horrific things keeping popping up.  Not only do these events force us to lose loved ones and make us constantly feel uneasy but they also take away our overall feeling of freedom and our piece of mind.  My thoughts and prays go out to everyone who was affected by this tragic event.  Times like these put everything into perspective, life is too short and precious to not live it fully.  Each day take the time to appreciate everything life has to offer, smile, have fun, tell people close to you that you love them because with a flip of a switch everything could be gone.

Many MLB teams paid tribute to Boston by having moments of silence and playing "Sweet Caroline" a favorite at Fenway during their games.  The city of Chicago posted this as the front page of their paper: 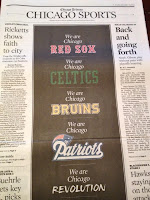 Our rival Yankees hung a banner outside of the stadium with each team's logos and the phrase "United We Stand" on it while some Yankees fans took it upon themselves to pay their own tribute to the Boston Bombings: 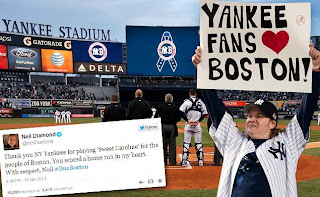 Make the most of this great day today!

Posted by Unknown at 8:18 AM No comments: 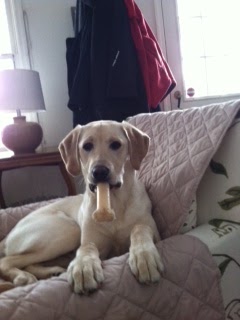 Happy 7 months to the Fin Man..seems like yesterday we brought you home! Haven't blogged in about a month or so things have been super busy with the kids at school and sports and what not.  Hope everyone is doing well, hopefully it starts to warm up a bit, I can't stand this cold weather.

With all the dangers that come with contact sports, it is surprising that more organizations have not come out with something like this.  While watching the Super Bowl, in between Doritos and Taco Bell commercials, the NFL was showing clips advertising their new site NFLEVOLUTION.COM.  Not knowing much about it I decided to take a quick look and I am glad I did.  The site is full of information, facts, tips and stories in regards to sports (specifically football) and the dangers and injuries that come with playing these sports.  If you have kids that play sports I would highly recommend checking out the site, I am definitely happy that I did.  I hope everyone is having a great week..almost the weekend!

Here is a link to the site: